The film studies program balances instruction in creating films and videos with courses in film history, aesthetics, and cultural criticism. We offer numerous hands-on opportunities on and off campus for you to put into practice what you’ve learned.

Hollins provides one of the most extensive film studies programs in Virginia. Explore classic Hollywood cinema, experimental cinema, and world cinema. An array of courses examines the films of individual directors, such as Ingmar Bergman or Alfred Hitchcock. Visiting scholars and filmmakers supplement the curriculum and screen their work at Hollins.

The Hollins Film Department offers an inclusive approach to filmmaking, where students can pursue their interests in narrative, experimental, documentary, animation, or all of the above. Students also learn both independent and Hollywood perspectives of the industry and a strong proficiency in film/video production technology. Additionally, the film program includes an option to learn 16mm filmmaking, a highly respected skill when pursuing a career in cinematography. 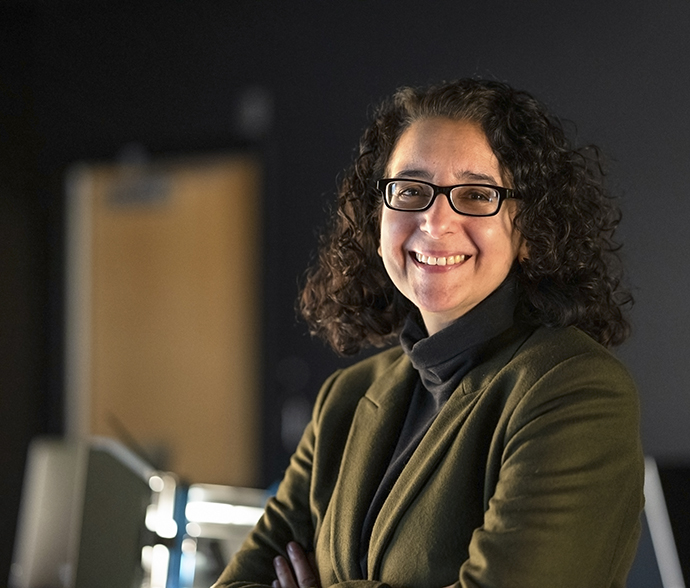 We teach a comprehensive curriculum for film studies and for film/video production. Other schools don’t always invest in all these disciplines under one roof. Very few schools in the nation offer an undergraduate all-woman film program, particularly a program that includes film/video production.

Do Something Original That I Could Relate To Hannah Thompson ’20 is generating impressive online buzz with her unconventional approach to the LGBT movie genre. Collide, a short film written and directed by Thompson, has been seen more than 510,000 times since it premiered on YouTube in December 2016.

“I wanted to do something original that I could relate to,” says Thompson, a double-major in film and psychology. Collide is the story of two young women who dislike one another intensely upon their first meeting in a high school classroom. But when their teacher pairs them on a project that focuses on conquering their individual fears, a friendship blossoms and they ultimately fall in love. More on her short film > The film department gave me the technical skills needed to create videos/short films while giving me total control over my projects and freedom to explore different types of films.

The film department provides an array of opportunities such as screening my projects at the Screening Night at the end of each semester, sponsoring a trip to Full Frame Festival in Durham, and giving me the access to a wide set of resources. Practical experience in film and television Career Success in the Film Industry

Film Students - Where Are They Now?

Film majors have had their work showcased at many impressive venues:

After graduation, students pursue work in:

Professor Amy Gerber-Stroh is happy to answer your questions.