For author Scott Blackwood, one word comes to mind when asked about Hollins’ Jackson Center for Creative Writing: commitment.

“I just wanted to teach at a program that was committed,” said the university’s new Distinguished Professor of Creative Writing. “Every person I’ve met so far — undergrads, graduate students, and faculty — is committed to the entire process of writing.”

Blackwood, who has a background in both fiction and nonfiction writing, is similarly committed to his craft, and it shows in his diverse body of work. He is the author of two novels, We Agreed to Meet Just Here and See How Small, both of which were released to critical acclaim. See How Small won a 2016 PEN USA Award for Fiction and was named an “Editor’s Choice” pick by The New York Times. His nonfiction credits include publications in Chicago Magazine and the narrative work The Rise and Fall of Paramount Records, Volumes I & II, which was nominated for the 2015 Grammy Award for Best Album Notes.

The relationship between teaching and writing is also powerful for Blackwood, whose teaching experience ranges from high school students to Ph.D. candidates. “Teaching has been a very positive thing for me,” he said. “When you start teaching other writers’ stories, you really think about the chances they took — and that inspires you to take risks in your own work that you might not have considered before.”

“I hope to help my students take risks, too. I’ve found that you will exponentially find your voice if you’re pushed in that direction. Students sometimes forget that they don’t have to focus on certain things in their writing or they feel like they have to be a certain type of writer. I want to be the ground beneath them that holds them up while they take risks of their own.”

Blackwood was particularly drawn to the openness of the M.F.A. curriculum. “I’m enamored with the cross-genre experimentation here. The way the graduate students come out with so many variations of the themes that interest them — it’s powerful. I’m eager to push them to play with form, structure, and point of view.” 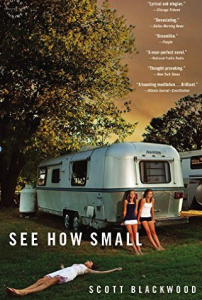 “For example, I’m really interested in ideas like a collective point of view or an associative plot, where a story isn’t just driven by the cause and effect we typically see,” he said. “What happens when a writer explores the collective voice of a place like a neighborhood or makes it so that numerous characters are brought into a different landscape and unified through that? That excites people.”

In many ways, Hollins itself encapsulates what matters the most to Blackwood when it comes to writing. “What’s important to me is the co-mingling of all these worlds. I don’t believe that every academic discipline or writing genre should be separated from each other. There should be some version of cohesion.”

Recalling his first meetings with various members of the English faculty, he added: “I felt so very bound to them and like we were collectively on a mission to do something special.”

Marin Harrington is a graduate assistant in Hollins’ marketing and communications department. She is pursuing her M.F.A. in creative writing at the university.