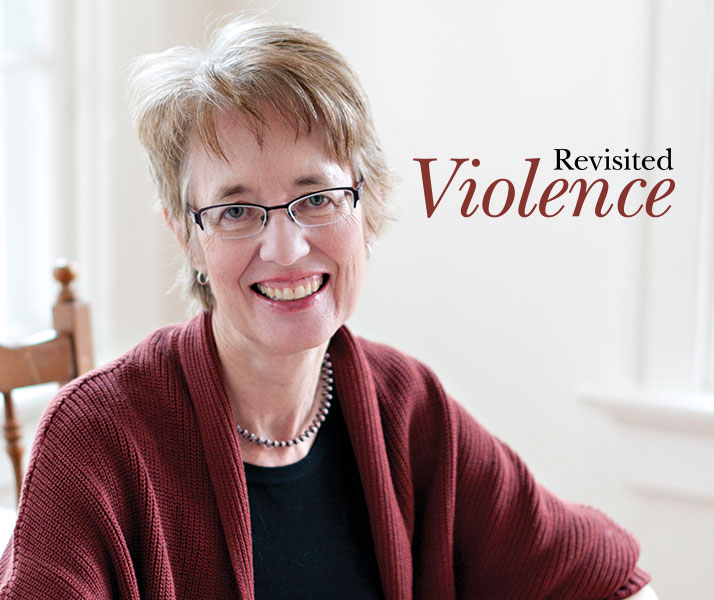 In her new novel, Centerville, Writer-in-Residence Karen Osborn ’79 draws upon her own childhood trauma to explore how a small town copes with a senseless act.

Bruce Watson knelt down on the floor, listening. The sunlight seemed to gather around him and he felt suddenly warm. “It sounds like a bomb,” he said, his voice strangely matter-of-fact. He pressed the edge of the paper bag between his thumb and forefinger, gingerly opening it. “It’s a bomb!” he said, louder.

How to employ violence in storytelling—and the choice to write about violence in general—became “a very personal journey” for award-winning novelist Karen Osborn ’79, who returned to Hollins this year as the Louis D. Rubin, Jr. Writer-in-Residence. Her latest work of fiction, Centerville (West Virginia Press), begins with a horrific event that alters the lives of a small Midwestern town’s residents in the late 1960s and is based on an incident that occurred during Osborn’s own youth: the bombing of a local drugstore.

“I was writing from a place of feeling deeply disturbed about witnessing this explosion and having known people who were killed in it,” she says. “I had written the opening but I wasn’t sure if it was going to become a novel. I just put it away for a year or two.”

Osborn was subsequently helping her parents move out of their house and discovered her diary from that year. “I was just a kid so there were all these really short entries. Then there were four or five long pages about the explosion and the fire. At the end there was a list of questions I had about what had happened. I realized I had the same questions as an adult, primary among them being what a lot of us ask after an act of senseless violence: ‘Why do things like this happen? Who does something like this?’ These are such simple questions and yet in many ways, they led to the writing of the book.”

Behind the soda counter, Debra saw the explosion, but her mind didn’t keep pace, so she didn’t know what had happened. What she saw was actually two explosions happening within seconds of each other – the sudden bright flash of the bomb followed by the burst of flames as the gas line at the back of the store ignited. She stood staring in surprise as her brother and two friends turned into three columns of fire. Inside the flames, she could still trace the outlines of their faces and bodies. This seemed a strange thing, and then she looked down and saw that her own body lay on the floor covered in flames. Osborn says she chose to employ understatement to describe the violence in Centerville. “I was trying hard to write about it realistically and avoid sensationalizing the violence in any way. That kind of read can be exciting, but then it’s easily dismissed. Going into it, I didn’t have any clear memories of the event, but as I started writing, I realized that witnessing that large fire made writing about one more accessible. I didn’t think I would have a lot of those details, but I did.”

Before she began writing the book, Osborn had a recurring nightmare in which she was caught in a fiery landscape looking for one of her children. One morning she awoke after having the dream and “it occurred to me that I was that kid. I realized, ‘Oh yeah, I was in that big fire. Why didn’t I make that connection before?’” Soon after she started writing about the incident, the nightmares stopped. “Maybe fictionalizing the event was therapeutic in that respect, and in a way that’s what dreams do: they call attention to something we’ve disassociated from.”

Within seconds, the building swelled with flames. They hissed down the aisles, lapping against the walls and shelves. In the center, the flames burned white. Along the edges they flickered yellow and red. The flames rose higher, ingesting oxygen, feeding on anything in their path. The light spread over them, and in the roar and crashing as the second floor dropped through the ceiling, there was the radiance of that light, like a chorus or the singing of angels.

One of Osborn’s biggest challenges was getting close enough to the fictional characters to portray authentically their sense of feeling overwhelmed in addition to their grief and fear.

“I very much felt a reverence for my characters and for people who had been through something like that,” she explains. “I’m really focused on characterization when I’m writing, and I was trying hard to give a respectful and insightful portrayal of their experience.”

Sandi moved toward the curb, but she couldn’t feel her feet. She couldn’t connect the pieces of what she saw. The drugstore was a tower of flames, and there were small fires on the pavement in front of her and behind her. Smoke passed through her like air, and the places that had melted on the pavement glittered with an oily sheen. On the sidewalk where Bert sat, hunched over, others gathered, coughing. She recognized several of them, but in this context none of them felt familiar. A woman shouted, and a man raised his arm, pointing. Bert had stopped screaming. The street filled with fire, flames skimming the surface of the pavement.

The bomber’s identity is revealed at the beginning of Centerville, but Osborn deliberately leaves open the question of why someone would commit such an act. She sees the takeaway for readers as “the understanding that violence is possible and in our midst, an idea reinforced as the book’s publication date overlapped with violence in small towns throughout the U.S. To acknowledge it and make connections with each other is much more important than a single person deciding that he or she will commit violent acts. Throughout the novel, characters make these connections. That’s the important thing.”