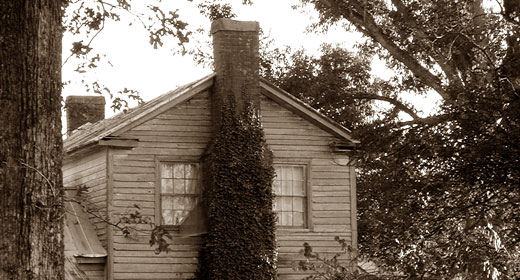 The Only World There Is Many years ago, on Thanksgiving Day, a friend and I were driving from New Orleans across Mississippi and Alabama to Florida. It was a clear, cold November day, that kind of day when the purity of the air gives a luminous, hard-edged clarity to the drawl of rustic landscape. As we drove along an old road, much less traveled than the interstate, we passed a young hitchhiker and then another going in the opposite direction, both of them bundled against the weather. It occurred to me that they might be

We drove in silence, perhaps mesmerized by the quality of light, and I at least was beginning to feel that old familiar ache akin to homesickness that I usually experience when surveying fields and farms, rivers and woods in autumn—even this far south and late in the season when the color of foliage, what of it is left, is muted. But the two of us were in the middle of life, well past the possibility of illusions of going “home”—that is, if home is understood as a place and a past that might be re-inhabited.

There is a body of writing which, taken seriously as a repository of human emotion, reminds us that landscapes, particularly autumn landscapes, have a way of delighting us with their beauty into the subtle dislocations of aesthetic apprehension and at the same time hurting us into introspection, and perhaps melancholy. “Aye, in the very temple of Delight,” as Keats puts it, “Veiled Melancholy has her sovran shrine, / Though seen of none save him whose strenuous tongue / Can burst Joy’s grape against his palette fine.” And that is why he enjoins us to do nothing that will “drown the wakeful anguish of the soul.” Keats is not thinking of landscapes specifically, but the same general principle applies to those intersections of consciousness and the world that stir us most poignantly into “the wakeful anguish of the soul.”

Starting out on an autumn walk or drive in the countryside, particularly in the north, I feel at first the invigorating air, and then my spirit lifts when I begin to take in the spurts of color in the foliage. But it is not long before I also experience, in addition to the rush of celebratory emotion, another sensation deep down, an ache of incompletion, of longing insistent as the light but inexplicable, resistant to words, yet intense enough to be recognizable when feeling is flooded with joy in nature.

Though this experience is more than we can express satisfactorily, and we know that it is, we nevertheless turn inward to a creation of words or music or images to assuage that ache. Beauty leads to the apprehension of the world’s strangeness, which leads to the motive to give “a local habitation and a name” to what we feel. It is as though we believed unconsciously that words have the power to heal the open wound of being.

Ultimately, of course, they don’t, but temporarily they may. Words are not only proof of their inadequacy in the face of emotional complexity, of the mystery of existence, they are also celebrations, a giving thanks for all that inevitably will be lost. Repeatedly we surrender the project of fitting language to feelings of loss, of homelessness in our being, and return to our scrutiny of the passing show. We regard the trees in their imperfections and embrace them in the generality of their names: oak, willow, pecan, tallow, sweet gum; we take account of hitchhikers; and we register by their names animals smashed on the roadway—possum, raccoon, armadillo, nutria, skunk, and the buzzards in their hovering glide, the hawks knuckled high in the unleaving hardwoods.

How can we understand this phenomenon, this hopeless hunger for the ideal that must feed without final satisfaction only on the actual, how explain to ourselves what is happening to us? Plato’s idea was that the world we know through the senses is but a reflection of a more perfect world, and the objects we encounter are no more than imperfect versions of that other realm. This explanation can and has been understood as analogous to the Christian view that humankind are fallen creatures, expelled from Eden, who, through Christ’s intercession, will return to a heavenly paradise where perfection reigns. Longing will disappear. There will be no homesickness then, since as people sometimes say when they are dying, they are “going home.” “Philosophy is at bottom homesickness,” writes Novalis; “it is the urge to be at home everywhere.”

These attempts to explain the mystery of creation are very old, and for many of us have lost their metaphorical resonance and thus their explanatory power. We have come to regard them at best as mere figurative representations, archaic poetic approximations of a condition we experience but can never explain nor understand. At worst they are accepted as literal representations, having been reified into irrelevant abstractions by habit and the inability or unwillingness to be in uncertainty. The truly religious dimension, awe in the face of the inexplicable, has disappeared.

This perception is far from new. Perhaps from the beginning humans have recognized that to reinvigorate a genuine sense of where we stand in the cosmos we must go on saying in new ways, in freshly figurative language how it is that we experience the mystery of being. It is for this, above all, that we are drawn toward poetry, poetry that penetrates the veil of spiritual and intellectual torpor and returns us to a vital apprehension, however briefly, of the real.

It seems to me that the sense of longing stirred by autumn landscape is not for a more perfect world we have lost and may regain, but for this imperfect world we are leaving day by day. Because autumn trees and stubble fields are what they appear to be and not the tarnished emblems of a higher world, we feel on occasion their irreplaceability and, like Gerard Manley Hopkins’ Margaret, mourn ourselves in them. Ultimately, the only escape from this mourning, this longing is the insensibility that brackets life. After consciousness begins and before it ends, however, many of us feel compelled to re-enact in words celebration and elegy, song and lamentation, giving thanks for being here in this landscape of incompletion, of homesickness, of the only world there is.

Eric Trethewey is professor of English and the author of six collections of poems: In the Traces, Dreaming of Rivers, Evening Knowledge, The Long Road Home, Songs and Lamentations and Heart’s Hornbook. His literary scholarship includes articles on various writers, including Matthew Arnold and Joseph Conrad. His poems, stories, essays, and reviews have appeared in numerous magazines and anthologies such as The Atlantic Monthly, The New Republic, The Paris Review, and The Sewanee Review. The Home Waltz, a screenplay, won the Virginia Governor’s Screenplay Competition.