on September 6 | in Featured | by admin

Participants in this year’s reunion bird walk were rewarded with the sights and sounds of several of the species that make their home on campus.

At 6:30 on the Saturday morning of reunion weekend, a group of alumnae gathered on the front steps of Dana for biology professor Morgan Wilson’s annual bird walk. Rain-soaked clouds didn’t dampen the participants’ enthusiasm—or that of the nearby birds, who sang with early-morning gusto. Even though we tend to use the term “bird watching,” Wilson said, listening is just as important. “The challenge [to birding] is learning the species not only by sight, but by song.” To that end, an important part of the curriculum of his ornithology class is becoming familiar with the sounds birds make. “Every time I had a song file on a quiz,” he said, “there would be a collective groan.” Still, even during this hour-long stroll along Carvins Creek, participants found it easy to distinguish between the sweet call of the song sparrow and the “cheer-cheer” of the northern cardinal.

Group members ranged from beginners to seasoned birders. Rachel Townsley Toth ’98 described herself as an “amateur” who likes to watch birds while she walks her dogs in Sandy Bottom Nature Park in Hampton Roads. Zelime Gillespie Matthews ’68, from San Antonio, Texas, was so enthusiastic about bird watching when her children were young that they told her they never wanted to see another bird. They have since changed their minds. Bebbie Thrower MacCary ’63 watches birds in New York’s Central Park and is especially active during the spring and fall migrations, heading to the park several times a week to see what she can see (and hear). “The real treasures,” she said, “are the warblers.” You can catch a glimpse of her, binoculars in hand, in the Netflix documentary Birders: The Central Park Effect.

Wilson told the group that there was no predicting what they would see on their walk—at the very least, several of the 75-80 species that have been spotted on campus. And that’s just what happened. After taking note of the song sparrow darting in and out of the foliage of the trees in front of Moody, the group saw the red flash of the male northern cardinal and the silhouette of two mallards flying overhead. High up in a tree along the creek was a gray catbird, a mimic like the mockingbirds and brown thrashers, also campus visitors. Sailing low over the creek was a yellow-crowned night heron. “That bird’s not supposed to be here,” Wilson said. Until recently the species didn’t show up on the distribution maps of the birds in the area. Now that they’ve taken up residence on Carvin Creek, there’s a little square on the maps representing their presence. Wilson pointed out a pair of bird boxes on the edge of the Moody playing field. For years, Wilson and his colleague Renee Godard have conducted various kinds of research on the bluebird population on campus—for example, testing whether applying the scents of predators to the boxes affects nesting behavior. Although the data about how bluebirds detect the scent of nest predators were inconclusive, the species has become accustomed to nesting on campus. While Wilson cleaned an old nest out of one box and showed the group the new nest being constructed in the box nearby, a pair of bluebirds, perched on a lacrosse net 25 yards away, watched closely.

Overhead, barn swallows dipped and swerved, possibly on their way to nests under the gym pass-through. In the distance participants could see a black vulture (“not a buzzard,” said Wilson—buzzards are raptors found in Asia and Africa) perched high atop the chapel steeple. Also on view was a blue jay, one of the most intelligent bird species, Wilson said, “capable of performing complex tasks.” The birds that elicited the most “awwws,” however, were the mother mallard and her eight ducklings waddling along the water’s edge.

To see a video of the birds that showed up for this year’s reunion walk, visit www.youtube.com/hollinsvideo.

Jean Holzinger is the guest editor for this issue. 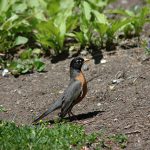 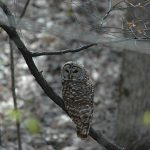 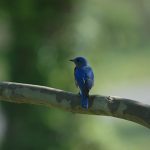 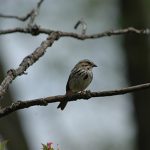 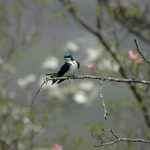 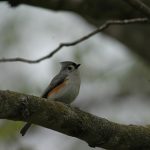 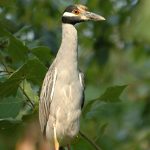