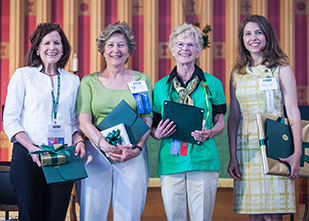 At reunion, the following received Distinguished Alumnae Awards for bringing “distinction to themselves and to Hollins through broad and inspiring personal or career achievements, volunteer service, or contributions to society.” Each recipient was invited to answer three thought-provoking questions about her life.

Emmons is the architect of the largest 10K road race in the world, the Peachtree Road Race in Atlanta, with 55,000 runners. After a 16-year career as associate professor of library and information science at Emory University, Emmons became the first woman executive director of a track club in the United States and served for 22 years as head of the 10,000-member Atlanta Track Club. She is in numerous sports halls of fame and has received many awards for her leadership, including being named Race Director of the Year by Road Race Management in 1988, the first woman so honored.

Upon graduating with a B.A. in economics and membership in Phi Beta Kappa, Towe found that many divinity schools would not admit women. When her youngest child started school, she started her journey at Yale Divinity School, earning her master of divinity degree in 1987. She served as pastor of Stanwich Congregational Church in Greenwich, Connecticut, from 1987 to 2007. In 1990 she became the first woman senior pastor for any denomination in Greenwich and surrounding Fairfield County.

Since 1972 Vance has served on the faculty of the University of Kentucky and received the university’s alumni association’s Great Teacher Award. She has published two full-length collections of poetry, a chapbook, and a short history of her hometown of Athens, Kentucky. Her work has appeared widely in journals, literary magazines, and reviews. In 2007 she was appointed the state’s poet laureate, the highest honor bestowed upon a writer in the Bluegrass State.

Barmeyer is a leading environmental attorney. She earned her law degree from Harvard in 1971, cum laude. For 17 years she worked on environmental and natural resource cases as assistant attorney general for the State of Georgia, arguing in the United States Supreme Court a dispute over the boundary line between Georgia and South Carolina. In 1990, she joined the Atlanta office of King & Spalding. Today she is partner and head of the firm’s environmental practice and has been named one of the Best Lawyers in America for more than 10 years. She was named the 2010 Atlanta Environmental Lawyer of the Year and has served on area environmental organizations’ boards.