TOP
Home  /  Featured   /  Reinventing in the Middle of Navigating Life 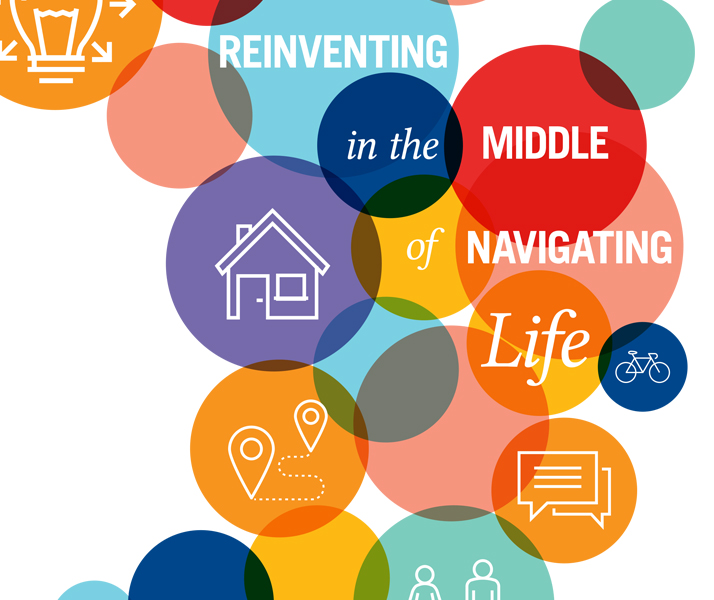 Reinventing in the Middle of Navigating Life

There you are in the middle of your life looking back and at the same time looking forward, knowing what lies at the very end. So, between now and then, what’s your next move? How do you make the most of your time and skills, leave your mark, find purpose and fulfillment, or do the best you can to take care of yourself and the people you love?

For Valerie Abbott ’93, Anne Altizer ’85, and Tierney Stone ’93, these have been reasonable but not easily answerable questions. In between navigating life events and making big decisions, they learned to reinvent themselves. To say Anne Altizer ’85, was immersed in the world of fundraising is an understatement. It was her identity.

Starting with a Short Term internship, Altizer made fundraising her sole focus. She was a road warrior for eight years, and after she had her two sons, she moved her fundraising focus to the nonprofit world.

Fundraising was something Altizer was known for throughout the country and about something she wrote extensively. But, her passion began to wane. She and her family had moved a few times and were living in New Jersey when she finally made the decision to leave fundraising – a decision that took an entire year.

“It was an emotional and intellectual struggle,” Altizer said. “Am I just going to become Connor and Ryan’s mom? That was really scary. I spent years building myself up…there was a huge fear factor: What am I doing to my family? Is it selfish?”

She finally left fundraising, spent a few months at home, and then started a business making custom stained glass pieces. At the time, her husband was traveling two weeks at a time, all over the world. Her business allowed her the flexibility to take on only as much work as she could handle. She spent 15 years developing a name for herself until 2012, when an accident changed the course of her life.

She was riding one day when her horse became spooked by a mountain biker. “I laid in a field for 45 minutes,” Altizer remembers. “I was alone.”

She had broken her back and what followed were four days in the hospital not knowing if she was going to walk again. She decided then to sell her horse and never ride again. She had plans and none of them involved a wheelchair.

Recovery was long: it took one month to get her range of motion back and a year to regain her strength. The pain lasted a long time. Then there was reconstructive surgery. Not only did the accident test her body, it tested what she wanted to continue doing in life. As she was finishing a custom stained glass piece, Altizer realized it was entirely too hard on her back.

She closed the stained glass business and was left with the question: what do I do now?

She had a desire to help people and eventually found an outlet as a personal trainer. She went back to school and earned a degree in exercise science and a certificate in nutrition, and most recently she passed the national corrective exercise specialists exam. She and her husband, now having moved to Florida, started a business working with companies and individuals on team performance.

Altizer and her husband travel the country consulting with clients through seminars and also have a focus on mindfulness. This is a key to Altizer’s ability to find balance and fulfillment today.

“I was forced to reinvent myself,” Altizer says, looking back on the riding accident. Giving up riding was “a huge, emotional loss for me, but it opened up a whole world…humans aren’t meant to do one thing. The world is too vast and too exciting to be stuck in one thing.”

She realized, “I’m not stuck. I’m not wed to one thing. That was very freeing.”

But more than that, Altizer said, “You come to the realization, ‘I am me.’ The other things are just labels. They are what you do, they are not who you are. My identity runs deeper than that. That made a big difference. I can do whatever I want and I am still Anne.”

As for the future – or a possible next chapter – Altizer said, “I’m hoping this is the last reinvention…that I’m old enough, and it won’t matter.” Valerie James Abbott ’93, didn’t walk off the stage at graduation thinking she would own and run a successful all-female painting company in Richmond one day. But that’s exactly what happened. First, though, she worked for 14 years at Bank of America, during which she got married and had two daughters, one who, at the age of two, was diagnosed with a hearing loss.

Then, in 2008, she became a partner in S&S Painting, a painting company owned by women and the employer of women painters. All longed for flexible schedules so they could find time to be with their families.

It was around year seven of owning the company that things changed for Abbott.

“What started out as a small, part-time mommy-friendly gig for me, had no longer become a family friendly endeavor.” It remained so for the employees, but for Abbott, the balance was off. So she asked herself: “Do you change yourself, or do you change your circumstances?”

She sold her shares of the company and moved on to something she wanted to add to her resume: stay-at-home mom.

“I didn’t ever want to regret not being one,” Abbott said. “I had always imagined that would be part of my life story. The importance of being available: that was the driving force.”

But for the first several weeks of her new gig, “I felt like I had to justify my existence at home with a clean house and a hot, cooked meal.” Since then, she’s given herself permission to slow down and focus not on how much she gets done.

“One of the things that’s new is not just being in the room with [my children] them when doing homework, but being available to answer questions,” Abbott said, adding, “Managing and implementing the family calendar after 3 p.m. is a full-time job.”

And the choice to stay at home, Abbott said, is just that: “I also realize that this choice I’ve made is not a permanent one. Just because you step away from the work force or business opportunity does not mean you can never get a job again.”

A turning point for Abbott and her family that has allowed her to reinvent herself again is the discovery and treatment of her daughter’s hearing loss. The experience motivated her to write a children’s book about hearing loss, for which she is trying to find a publisher. She has been vocal about the need for early detection.

After she sold the painting company and while she was a stay-at-home-mom, Abbott accepted a position with the Department of Health’s Center for Family Involvement as a 1-3-6 Family Educator, a six-to-16-hours-a-month job focused on reducing the number of follow-up newborn hearing screenings.

“There is a large percentage of babies who fail the newborn screening test and are not retested until kindergarten,” Abbott said. “How does that happen?”

In the first month of life, babies need to be screened. If they fail within their third-month birthday, an audiologist needs to conduct a full evaluation. If the baby fails the evaluation, preventative care needs to be administered by month six of life. Her daughter was diagnosed by age two and had hearing aids by her third birthday. Her work now allows her to ensure other families don’t go that far without detection.

“The farther I am from Bridie’s hearing loss, the harder it is for me to go back in time and recall our journey,” Abbott said. “I have to do this work now.” Being a florist was not in Tierney Maher Stone’s ’93, life plan.

“If you told me five years ago that I would own a flower shop, I would have thought you were completely, barking mad,” Stone said.

Five years ago, she was living in London with her two sons, working in the world of finance, something she’d been doing there since graduating from Hollins. It was during a vacation to South Carolina a few years ago when one of her sons, upon returning to London, asked, “Why are we here?”

Stone knew there would be a move in her future and, having been in finance for 20 years, thought her work would continue in finance.

In 2014, Stone and her sons made the move to Beaufort, South Carolina, where she consulted for the company she worked for in London. In 2015, she noticed a flower shop for sale in a landmark building.

“My view was, I love flowers, I don’t know if I can run a flower shop, but I know this is a prime piece of real estate,” Stone said. “At the end of the day, I could renovate the building.”

Her love of flowers and flower arranging started in London with her Friday visits to her now ex-mother-in-law.

“At Liverpool Street Station, there was a flower stand and I got into the habit of bringing my mother-in-law flowers,” Stone said. “She would be cooking dinner and ask me to put [the flowers] in vases. And I was terrible at it. She is a proper British lady and she said, ‘Darling, do you want me to show you how to do that?’ She taught me how to arrange flowers in the English garden style. That’s where it started.”

Now, after having run the flower shop for a year, Stone says, “It’s been a very exciting year. I feel like I bit off more than I could chew. I had a lot to learn.” But, she adds, “I finally feel like I’m doing what I was born to do. I have a new career and I can go anywhere and be a florist.”

There are the occasional seven-day work weeks and challenges to running a flower shop in a small town, not to mention the competition with grocery stores selling flowers. But, Stone said, “At least I’m not doing Excel spreadsheets. That’s nothing compared to 10-year cash flow projections. It wasn’t creative. I get to work with beauty. Part of me was done with finance.”

Despite the intense year, Stone says the family’s quality of life has improved beyond what she imagined. Bike rides on Sundays, walking on the beach – it would not have been a reality in London, she said.

“For all of the change, repatriating after 20 years is like reentering the atmosphere after being in space,” Stone said. “It’s been worth it. I wouldn’t change a thing.”

Sindhu Hirani Blume ’93, is a director at PricewaterhouseCoopers in Washington, D.C., where she hosts “Inside Tax Policy,” a weekly policy show for the firm’s clients. She also is working on a collection of essays about the 1947 partition of India. She lives with her family in Bethesda, Maryland.