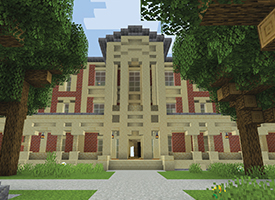 Reilly Swennes ’20 built a Minecraft version of Front Quad during the spring. Below are some excerpts from her explanation for this passion project:

What inspired me to build Hollins on Minecraft first came purely out of boredom, but as I continued to build, it had more to do with how dearly I missed the campus and everyone in it. My goal then became sharing my progress with my friends over Facebook (alumnae/i, professors, current students, etc.) because I knew so many of us could not visit campus, and photos alone cannot capture it all.

I used floor plans, Google Maps, photos, and just the overall feel of a space to make this project come to life. Main was the first structure I built and, considering I had not played on Minecraft since high school, it was more challenging than I had anticipated. First, I had to come up with a block palette and map out a general outline for where everything would go. Then I spent a few hours a day over a couple of weeks placing each and every block by hand without any console commands. After getting the hang of things, I quickly finished portions of Front Quad, the covered walkway, and Bradley Hall.

I built the campus on a super flat world, because that way I would not have to contend with any pre-existing structures or biomes that might get in the way. The tradeoff for this was that I had to build every hill and plant every tree myself. One of the issues that I ran into during this process was realizing that super flat worlds are also super thin and leave virtually no room for basements, so I have to get creative and fudge the topography of the campus a bit. Still, I am pretty happy with how it turned out.