The Lasting Importance of Ephemera

on February 8 | in Featured | by admin What scrapbooks, diaries, newspapers, and receipts tell us about life at Hollins during the Civil War.

Few of us consider keeping receipts from our trips to Kroger or Starbucks. We think of them as recyclable paper items, not as clues to help decipher daily life in the twenty-first century. To librarians, however, receipts like this, along with other such pedestrian relics, are keys to understanding the past. That’s why, when Beth Harris, special collections librarian for the Wyndham Robertson Library, uncovered some old materials two years ago, she knew she had found a treasure: artifacts and documents from the 1800s, many of which chronicled daily life at Hollins during the Civil War

Harris learned that many of these things had arrived long before she did and were packed far away. There were rare books, which detailed Virginia life during the Civil War. But there were also scrapbooks, letters, photographs, sheet music, newspapers, pamphlets, ladies’ fashion magazines, receipts, a diary, and other such records. A few of these, such as the scrapbooks and the diary, came with letters from the family members who donated them. Some items came with brief, scanty notes, a few words scratched on scraps of paper. But many things came with nothing at all. After sorting through them, Harris realized that the lack of background material was probably because most of the items would have seemed unimportant. She has found, for example, a receipt for a Confederate uniform and a receipt for a dress and bonnet. “Even though something like a receipt may not seem exciting, it did get saved by somebody,” she says. “Did it get saved by accident? These are the oddball things that people keep for some reason. They’re ephemeral, they’re not necessarily meant to be kept, like a painting. But they connect us with our past and culture, especially at Hollins.”

As Harris documented each item, she knew there would be public interest. Last year, she created a slideshow titled “Civil War Resources in the Hollins University Archives,” which she shared at Roanoke College during Archives Week, sponsored by several area archives, to highlight some of what she had found.

Her research told her a lot about life at Hollins during those years. For example, she learned that Hollins’ enrollment nearly doubled, from 83 students during the 1861-62 session to 160 for the 1864-65 session. “Oral tradition says that once the Civil War began, parents sent their daughters to Hollins to get them away from the war,” she says. Even with the increased student body, the number of faculty remained small, with only eight to ten professors for more than eighty students.

The campus cooking, cleaning, laundering, and maintenance was provided by the staff, which included white domestics, slaves who belonged to the Cocke family, and slaves who were hired out from the community. Harris has a photograph of one local black man, Clem Bolden (ca. 1846-1929), whose enslaved parents were hired out from another family to work at Hollins around 1857. Their son was “drafted” into the Confederate Army in 1864 and served as a teamster for two years. After the war was over, Clem Bolden returned to Hollins, where he lived and worked for the rest of his life.

Harris also learned that during the Civil War, annual tuition for a Hollins student was $20 to $40 for an art program, $50 for a music program, and $60 for a general course of study. This general course of study would have included English literature and composition, modern languages, Latin and Greek, mathematics, natural sciences, “moral science,” and history. A student’s room cost $20 and her board cost $200. A year’s worth of washing was $20.

All of these costs, programs, and services, Harris also learned, were similar at Hollins before the war. But the student who attended in 1861 through 1865 would be reminded of the war through letters from home, through her professors and fellow students, and through the diminishing supplies. This last fact led to the early closing of the Hollins session in December 1863. Harris knows all this because she found the Catalogue of Hollins Institute (of Botetourt Springs, Virginia), from the years 1861 through 1863, which states: “The Session of 1863 opened on the 20th of May and closed on the 10th of December following a temporary arrangement adopted in view of the prospective difficulty of obtaining supplies.”

The lack of supplies was a very real challenge during the war. Harris learned that the construction of Hollins’ Main Building, for example, was begun on April 17, 1861, the day that Virginia seceded from the Union. But due to the lack of building supplies, it was not completed until 1869. Parts of the building were used as they were finished.

Sometimes, Harris explains, missing information actually can tell us a great deal. For example, she read in Frances Niederer’s Hollins College: An Illustrated History that during hard times some families occasionally paid their daughters’ tuition in goods. Niederer writes: “Some student fees during these years [1860s] and after were paid in provisions, some not at all” (p. 15). Niederer doesn’t cite her source, however, and Harris hasn’t come across any records that indicate what kinds of goods were traded for tuition, or for whom. “I would guess that was kept quiet out of respect for the families, so they wouldn’t be embarrassed,” she explains.

But life went on, even if frugally, and Hollins students were still young women with dreams. The library collection includes nearly forty years’ worth of Godey’s Lady’s Book, a popular monthly publication in the nineteenth century that included poetry, articles, beautiful illustrations, and pictures of modern fashions. Most Hollins students would have read Godey’s—likely shared among friends, as a subscription was considered expensive—and admired those fashions, even if they couldn’t afford them. After all, the typical clothing for a Hollins student was practical, Harris notes. The regulations in the 1861-63 catalog state that “every pupil must be furnished with thick leather shoes, sun-bonnet, [and] shawl.” The collection also includes a receipt from 1864 that lists the cost of making a dress ($12) and a bonnet ($40) for a student named Mollie Tinsley. Alumna scrapbooks, although they may not mention the war specifically, also provide a picture of daily life during those years. One scrapbook, Margaret Jane “Lizzie” Campbell’s Album of Love, includes a page from her sister on which is written this poem: “When I am far away / Or cold and silent in the grave / This braid of hair will call to view / The pleasures I have shared with you.” It is signed “Your affectionate sister Mollie” and dated March 22, 1861. Attached to the page is a lock of her hair, intricately woven into a flower-like ornament and tied with a checkered bow.

Besides telling Hollins’ history, the artifacts also make connections in Harris’ own life. When she was reading Laura Ingalls Wilder’s Little House books to her daughter recently, she found a description of the fashionable calling cards that women left when making social visits in the nineteenth century. “I remembered that I’d just recently seen ladies’ calling cards like that in one of the Hollins scrapbooks.”

Among the papers Harris found was the diary of former student Virginia Daniel Woodroof of Amherst County, kept from 1861 through 1890. It was identified as having been given by Woodroof’s son, Harry A. Murrill, in May 1961. Woodroof attended Hollins Institute from September 1864 to June 1866, and her diary paints detailed pictures of life at home and at school. In early January 1861 she wrote, “Business was suspended in the cities [on January 4, 1861] and a sad solemn feeling pervaded the whole country. Civil War with its dreaded horrors…has commenced. All social topics give way before this one question, are we to submit or shall we arm for the struggle at hand.”

Another topic of the times, pertaining to women, was reflected in an essay written by Hollins language professor Edward S. Joynes and published in the 1863-64 catalog that Harris found. In his essay, “The Education of Teachers in the South,” Joynes proposed that Hollins establish a normal school for the training of teachers. “This was important because until then, women were discouraged from being teachers,” Harris explains, but it became necessary as more and more men were lost to the war. “Plus, after the war, nobody wanted any Yankee teachers, men or women, coming to the South to teach their children, so they wanted to train their own.” Joynes sought to “encourage the most refined and gifted young ladies to enter this profession.” He writes: “To what source, then, can we look for the moral and intellectual support of our society in the future than to the influence of Educated Women, the sisters, the wives, and the mothers of the next generation?…The responsibilities of the women of the South will be greater in the next times than ever heretofore, or ever perhaps hereafter.”

As fascinating as the items are, they are not often on display, although visitors, students, and faculty can make appointments to see them. Harris explains that these items are fragile, brittle, and sensitive to light, temperature, and handling. Most are wrapped up or gently cradled in archival-quality boxes. “They’re the same as museum objects,” Harris says. “They’re irreplaceable, and they must be protected.” She adds that sometimes they come out for an exhibit or a class visit, but not for long.

“These things matter, so that we don’t forget,” Harris explains. “They make the past more real.” 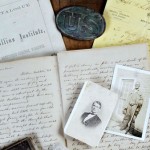 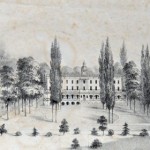 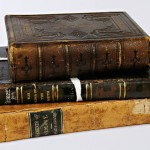 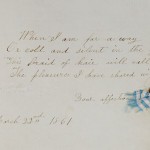 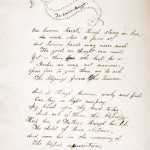 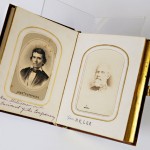 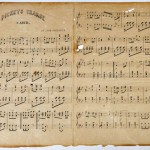 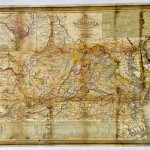 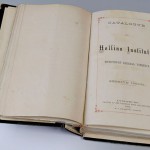 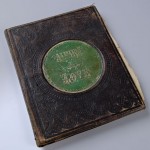 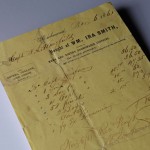 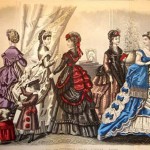 « Hollins women — Past, present, and future The Big Book About the Big Whale »