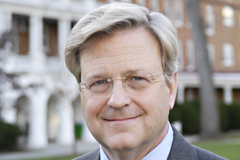 “We are delighted to welcome Mark to Hollins,” said President Gray. “His leadership skills, fundraising expertise, passion for the liberal arts, and familiarity with single-sex institutions make him an outstanding addition to our administrative team and an effective advocate for Hollins and its mission. We are extremely fortunate to have him join us.”

Jones previously held chief advancement officer posts at three other distinguished liberal arts institutions. From 2004 to 2008, he was vice president for college advancement at St. Norbert College in Green Bay, Wisconsin, where he spearheaded all advancement efforts, including fundraising, alumni engagement, sponsored programs, communications and marketing, government relations, and community outreach. In addition, he served as dean for advancement and secretary of the college at Indiana’s Wabash College, a college for men (2001-03), and as vice president for advancement at Goucher College, a former women’s college near Baltimore, Maryland (1994-2000). Jones also lived in Virginia for several years (1987-94), while serving at the University of Virginia, first as director of corporate relations and later as executive director of the Virginia Engineering Foundation.

A native of upstate New York, Jones earned a bachelor of arts degree from Hartwick as well as a Juris Doctor degree from Cornell Law School and a certificate in educational management from Harvard University’s Graduate School of Education. His son, Matthew, is a sophomore at Hampden-Sydney College.