Her newest book, the middle-grade novel The Hole in the Wall, won the 2010 Milkweed Prize for Children’s Literature. She is past president of the Children’s Literature Association, and is also the author of I Walk in Dread: The Diary of Deliverance Trembley, Witness to the Salem Witch Trials; The Hickory Chair; and Ash. As Lisa Meunier, she is the author of the forthcoming poetry chapbook, Hitching to Istanbul. His most recent book is Down by the Eno, Down by the Haw: A Wonder Almanac. His poetry books include Arcadia Road, Venison, Odd Botany, and Making a Map of the River. Chapbooks include Meltlines, The Guessing Land, and Off Owl’s Head. Watershed Days: Adventures (a Little Thorny & Familiar) in the Home Range, a work of nonfiction, was published in 2015. His writings appear regularly in journals, and selections are featured in several anthologies. He has received a National Endowment for the Arts fellowship, and Jacob K. Javits, Sustainable Arts, and Henry Hoyns fellowships, and was awarded the George Garrett New Writing Award from The Fellowship of Southern Writers. Forthcoming this winter is True as True Can Be, a middle grade novel, and his next collection of poems will be released in fall 2022. Jeffery N. Bullock, director of the M.F.A. program in dance; associate professor of dance; chair of the dance department; dancer and choreographer; B.A., University of North Carolina of the Arts; M.F.A., University of Iowa Lange is the former superintendent of Roanoke County Public Schools. Lange was named the Virginia Superintendent of the Year in 2011 and 2012. She was a named a “Tech-Savvy Superintendent” by E-News. She also received the Virginia Excellence in Education Award from AdvancED. Locally, Lange was named Citizen of the Year by the Salem-Roanoke County Chamber of Commerce and was given the Art Venture Award at the Taubman Museum of Art. Professor Ristau’s work has been performed in theatres across the U.S. and England, including London’s West End. He founded No Shame Theatre in 1986 and oversaw its evolution into a national network of venues for new works in dozens of cities. He has an extensive theatre background, with expertise in acting, directing, and design. He worked with Mill Mountain Theatre for six years as coordinator of their second stage and as literary associate overseeing new works programming. Ristau served as the first artistic director of Studio Roanoke, a storefront theatre space dedicated to new works development in downtown Roanoke. Ristau is an active member of the Dramatists Guild, and member of Literary Managers and Dramaturgs of America.

He has served as chair of playwriting for the South Eastern Theatre Conference, Getchell New Play Award Committee, and KCACTF Region IV’s Chair of the National Playwriting Program. 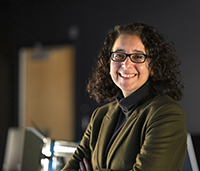 Amy Gerber-Stroh, codirector of the graduate program in screenwriting and film studies; M.F.A., California Institute of the Arts, School of Film/Video

Gerber-Stroh’s films have won honors at numerous film festivals and professional venues, including Edinburgh International Film Festival, Mill Valley Film Festival, Film Forum, Los Angeles, and Women in the Director’s Chair, Chicago. She also directed films for the Los Angeles County Museum of Art from 1993 to 1996. She has had significant professional film experience in Hollywood and New York, working on several movie features by Roger Corman as well as casting 12 major motion pictures including The Mask of Zorro (Goldeneye, MGM), Afterglow (Sony Pictures Classics), Tank Girl (United Artists) and Angels in the Outfield (Disney). Gerber-Stroh’s latest film, Do Cell Towers Dream of Morse Code? (2019), was honored with the Silver Award for Experimental Works at the 2020 University Film and Video Conference (home of the Journal of Film and Video), and also earned awards and acclaim at film festivals such as the Seattle True Independent Film Festival and Chicago’s International Art House Film Festival. Gerber-Stroh is currently producing a feature-length documentary about her great, great, grandparents who escaped slavery during the Civil War. Brian Price is an award-winning screenwriter and director who has worked with major studios, independent producers, and television networks from around the world, including Universal, Warner Bros., Endgame, Blaspheme Pictures, Scanbox Entertainment, Hudson River, and Mother Films. He’s taught screenwriting at the UCLA School of Theatre, Film and Television, RIT, Yale University, Johns Hopkins University, and the Brooks Institute, where he developed their M.F.A. screenwriting program. His students have gone on to direct for folks like Steven Spielberg and to be nominated for Emmys and Golden Globes, and most impressively, he still gets residuals for playing the vice president of the Burt Reynolds fan club in an episode of Beverly Hills 90210. His book, Classical Storytelling and Contemporary Screenwriting, published by Focal Press, is required reading in screenwriting programs around the world.