Based on the children’s book by Margaret Wise Brown, Hollins class of 1932. Adapted for the stage by Chad Henry.

The tradition returns to Hollins so every generation can enjoy the delight of Goodnight Moon on stage! As part of our ongoing Legacy Series which showcases dynamic plays, musicals, and original theatre pieces based on the work of Hollins’ most-celebrated authors, we are thrilled to announce the return of this exciting musical theatre experience based on Margaret Wise Brown’s celebrated book. Enter bunny’s wondrous great green room, filled with toys and pictures, and watch the fanciful story of goodnight wishes come to life in this vibrant musical comedy. This is a bunny who can’t seem to go to sleep, as his overactive imagination carries him over the moon and back. Chad Henry’s clever and charming adaptation comes straight from the pages of Margaret Wise Brown’s classic children’s tale, which has sold millions of copies around the world. For little kids, college kids, parents, grandparents, and children of all ages. Princess Imogen is catapulted onto an epic journey when her father, King Cymbeline, banishes her soulmate. Featuring a band of tough but lovable woodsmen, an evil queen, noble battles, and unexpected plot twists, this late Shakespearean play enchants audiences with a story about a powerful princess who will do anything for love.

Tickets to the general public will only be available the evening of the performance. You may purchase them at the door starting at 6 pm. We will not be taking any reservations for this performance and tickets will be sold on a first come first serve basis. A script-in-hand staged reading that captures the life and action of the play. Four badass women lose their heads in this irreverent comedy set during the French Revolutions Reign of Terror. A playwright, a queen, a rebel, and an assassin drive this dream-tweaked play, which is about violence, legacy, art and activism, feminism and terrorism, compatriots and chosen sisters, and how we actually go about changing the world.

“The Revolutionists resembles a blindingly scintillating gem-like puzzle…By turns it is drolly funny and affectingly poignant, then doubles back to satirical farce, then ends by bringing into stark relief the social commentary that it has been nurturing all night.” — FloridaTheaterOnStage.com

This event is the cornerstone of the dynamic partnership between Hollins and MMT. The Winter Festival features two new plays by Hollins playwrights and faculty presented in rep on Mill Mountain Theatre’s black box stage. Over the span of 30 years in one apartment in the Silverlake neighborhood of Los Angeles, lovers come together, fall apart, and move on through life’s choices.

Arachnothology (A Study of Spiders)

A study of spiders in written language: Arachne to Spider-Gwen; 90,000 species; 13 scenes. With a cast of all female performers, Arachnothology tracks the evolution of spiders through mythology, folklore, nursery rhymes, popular culture, and science to weave a tapestry about identity and choice–and whether or not it’s possible to start over. By Susan Booth. Based on the book by Natasha Trethewey M.A. ’91. 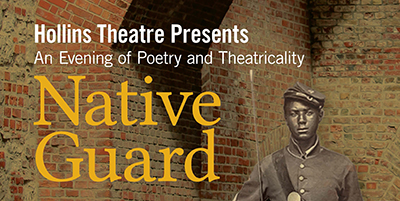 Native Guard juxtaposes the deeply personal experiences of Trethewey, a child of a then-illegal marriage between her African American mother and Caucasian father living in 1960s Mississippi, with the experience of a soldier in the Native Guard, the first African American Union troop in the Civil War who was charged with guarding white Confederate captives. Years after her mother’s tragic death, Trethewey reclaims her memory, just as she reclaims the voices of the black soldiers whose service has been all but forgotten.

Join in a conversation with honored guest Natasha Trethewey immediately following the performance.

Adapted by Lydia R. Diamond. Based on the book by Toni Morrison. Directed by Dominic Taylor. 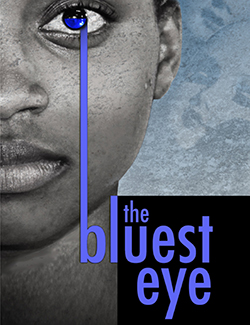 A script-in-hand staged reading that captures the life and action of the play based on the monumental book by Nobel Prize-winning author Toni Morrison. The Bluest Eye is a story about the tragic life of a young black girl in 1940s Ohio. With rich language and bold vision, this powerful adaptation of an American classic explores the crippling toll that a legacy of racism has taken on a community, a family, and an innocent girl. Directed by resident professional teaching artist Dominic Taylor, Hollins Theatre is proud to honor the late great Toni Morrison with this staged reading of one of her most important works performed by Hollins students.

The Curious Incident of the Dog in the Nighttime

By Simon Stephens. Based on the best-selling novel by Mark Hadden. Winner of seven Olivier Awards and five Tony Awards including Best Play. The play that dazzled Broadway and West End audiences, brings Mark Haddon’s best-selling, award-winning novel to thrilling life on stage. Tenacious and intelligent, Christopher is a teenager on the autistic spectrum, who’s better at solving equations than navigating a world that’s stubbornly out of sync with how his mind works. After being wrongly accused of murdering his neighbor’s dog, he resolves to find the real culprit. But, when his investigation uncovers painful truths about his family, he dares to strike out on his own, embarking on a thrilling adventure that upturns his whole world in a thrilling, heartwarming, and uplifting story for every one of us. Recommended for ages 12 and up due to strong language throughout the production.

“A beautiful and dazzlingly inventive show about the wonders of life.” — Evening Standard No Shame Theatre provides an experiential learning experience for all aspects of live performance – original plays, innovative performances, and freedom of expression. This limited run of seven No Shames is being produced in conjunction with the undergraduate playwriting fundamentals course—taught by the inventor of No Shame, Todd Ristau. No Shame is a place where anything can happen, and usually does! Come to watch, come to perform, or bring an original piece of your own to put on stage. The Hollins Theatre Institute is excited to have the opportunity for our student actors, directors, and playwrights to become part of this internationally recognized theatre event. In just 24 hours they will experience the entire process of new play development from inspiration to public performance of brand new 10-minute plays.

Produced by the fall 2019 directing class. Featuring nationally published plays and work from the Hollins Playwright’s Lab, these student-directed short plays provide a showcase where Hollins’ best can flex their creative muscles and show off their growing talent. A collection of exciting new plays centered on the one thing all Roanokers have in common – our crazy and much-loved neon star!