Our summer Screenwriting and Film Studies M.F.A. and M.A. programs offer an experience unlike anything on the East Coast. We’ll challenge your expectations and help you prepare for a career in writing for film, television, and digital media. Small classes with personalized instruction drive growth in our students and foster deep, long term relationships. You’ll work with program directors with many years of experience, along with professors who have worked in the industry, and learn directly from experienced professionals with a long and impressive list of credentials.

Our program faculty >
Our visiting faculty >

For those wanting to pursue a professional career in filmmaking, the Screenwriting M.F.A. program offers an intensive, six-week program each summer. Students generally complete the degree requirements in three to five summers.

A master’s in this program prepares you for a rigorous academic and critical study of film. The degree may be completed in three to five summers. 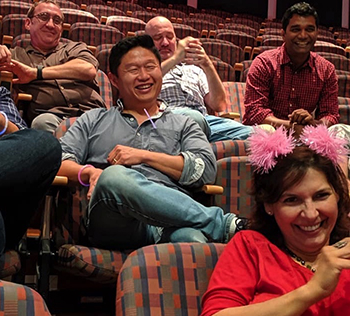 Passionate about story and film By delving into screenwriting at Hollins, I developed the most important component of my film career, which is storytelling. It allowed me a deep understanding of character creation, conflict, story structure, and script writing that I couldn’t have learned through film production. I was lucky to be surrounded with people who are passionate about story and film who continue to be part of my go-to network today.

Come prepared to work. You’ll develop, pitch, and write your film, television and digital media projects. During our six-week program, students immerse themselves in a professional, collaborative environment. They work with, and learn from, industry professionals with decades of experience in the film and television industry.

Come be a part of a one-of-a-kind program. At Hollins, you’ll build relationships that will not only enrich you, but also prepare you for your future.

“We Bring a Piece of LA to the Roanoke area.”

Our faculty consists of professors from world renowned film schools including UCLA, NYU, and the University of Texas at Austin. Other instructors include professional film and television writers and some of the most innovative creators of digital media on the scene today.

Guest Artists:
Each summer we welcome guest artists to share their work and experience. Past speakers have included:

A Program led by Seasoned Filmmakers

Codirectors Amy Gerber-Stroh and Brian Price are both award-winning artists who boast years of experience throughout the industry, from independent film to major studios.

In a career spanning more than two decades, Amy has produced and directed films that have captured honors at major film festivals and professional venues, and has worked with Disney, Warner Brothers, and Columbia Pictures. She also chairs the film department at Hollins, where she teaches production, animation, and film studies.

A screenwriter and director, Brian has taught at the UCLA School of Theatre, Film, and Television and Yale University. His students have gone on to earn Emmy and Golden Globe nominations, and his book, Classical Storytelling and Contemporary Screenwriting, is required reading in screenwriting programs around the world.

Learn more about Amy and Brian on our Meet the Codirectors webpage. If you have any questions about the program, contact them at hugrad@hollins.edu.